Rule 13: Be a Comfort Zone Buster

July 4, 2017 by Sandler in Management & Leadership 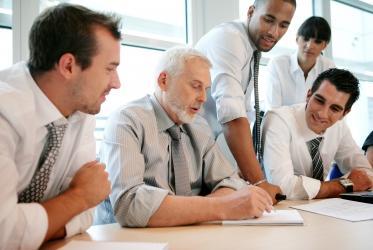 Get The Sandler Rules for Sales Leaders in our online shop or purchase your Kindle version on Amazon. It is the definitive resource for effective sales leadership, based on the proven principles of the Sandler Selling System.

There's no room at Complacency Inn. What does that mean? Well, have you ever run into a situation where somebody on your team was killing it? I mean doing everything that they had to do, above and beyond, things that they felt uncomfortable doing and things that they felt comfortable doing. They did all of that package to become a top producer. Then, for some reason at some period of time, it went to just coasting. Now, some people are aware that they're coasting. The majority of people don't even know they're coasting. Why do they coast? Well, a couple of reasons.

Number one, maybe they're just tired. They need to take a rest. When coasting becomes a way of life, that's trouble. See comfort zone means I'm doing things in my sales world that makes me uncomfortable. I get to a certain spot in my career, and I deserve, I owe, you owe me, the ability to coast. That's what's going on. I may be just tired. You have to make sure that they don't become a way of life.

Others are in an economic comfort zone, which is, "I killed myself to make enough money to support my family the way that I wanted to. I'm not going to do any more, and I won't do any less." They hit this plateau and decided, "This is good enough for me." You know they're working at 70% of capacity. If they could just break that, they would be awesome. Here's the problem. Comfort zones happen for everybody including you as a sales leader. How do you break your comfort zone? How do you put a 'no vacancy' sign on Complacency Inn? Create a cookbook. If you have a recipe for success which is what do they have to do every single day to be successful, they'll do it.

By saying, "You need to increase your productivity by 30%, no one wants to do that. But you say, "Here's what you have to do every single day. "That they co-created a list of behaviors for them to become successful. They do a little bit each day. It's kind of like Fitbit. If you said hey, I've got to walk six miles a day, I'd say, "You're insane. I'm not doing it. I don't have time." Guess what? I put the Fitbit on, and they count my steps, which is a cookbook. They count my steps. They count the stairs. They don't say, not 10 miles. They say, "Just how about some steps?" When I do the steps, I look back, and I say, "Oh, my gosh, I went 10 miles today. It's awesome." I got out of my exercise comfort zone. Now I'm trying to do steps every single day. I'm waiting for it to say, 'You did 10,000 steps." They busted my exercise comfort zone.

I deal with comfort zones most often in my personal coaching with people who are very successful that aren't doing what they did to be successful throughout their career. They stopped for some reason. They stopped risking; they stopped doing all the things that made them great. We've got to bust that. How do you bust it? Cookbook. Your job as a leader, who's in a comfort zone, who's not, including you. Let's get a cookbook up and going for everybody on my team. You will become a comfort zone buster.

THE SANDLER RULES FOR SALES LEADERS details a sales management process that works. It offers 49 timeless, proven principles for effective sales leadership, based on the Sandler Selling System. The book is the sequel to the Wall Street Journal bestseller THE SANDLER RULES, also authored by David Mattson.

Sandler is a global training organization with over three decades of experience and proven results. Sandler provides sales and management training and consulting services for small- to medium-sized businesses as well as corporate training for Fortune 1000 companies. Our proven methodologies and specialized tools equip our trainees with the skills necessary to improve both their business and bottom line.
Share this article: